Fennel seeds are a natural trapped gas remedy with many benefits for better digestive function and intestinal health.

Here’s how the seeds of the fennel plant improve digestion and ease intestinal upset. Also ahead, the best ways to use fennel seeds for stomach pain, belly bloat and embarrassing gas.

What are Fennel Seeds?

The fennel plant, scientific name Foeniculum vulgare, is a native perennial originating in the Mediterranean but now found worldwide. While the fennel bulb and leaves can be eaten, the nutrient rich seeds provide the most benefits.

Dried fennel seeds have an aromatic anise flavor and are often used in cooking. They also have significant medicinal qualities that makes them a powerful natural remedy for many conditions.

In India, fennel seeds are very popular as an aid to digestion and have been used for this purpose for thousands of years.

A small amount of the seeds are routinely chewed after a meal, both to freshen the breath and to stimulate digestive function.

Scientific studies on fennel seeds show their rich volatile oil content is primarily responsible for their positive effects, such as their ability to clear intestinal gas so effectively.

Drinking a great tasting fennel tea, like this high potency one I use in my kitchen, or eating the fresh seeds, is a simple way to address many digestive upsets and gastrointestinal issues.

Chewing on a teaspoon of the seeds straight after a meal, or sipping on a strong fennel tea while you eat, can be an effective way to prevent heartburn and acid stomach.

The volatile oils in the seeds have calmative properties that help to reduce indigestion and acid reflux, though see your doctor if you experience GERD symptoms regularly.

Eating the seeds, or drinking fennel seed tea, has also proven effective for many people suffering from irritable bowel syndrome.

Research published in the American Journal of Gastroenterology found that IBS patients who took fennel seeds three times a day had a “marked improvement with less abdominal cramps, less dependence on a laxative… and less visits to physicians”.

Heather’s Tummy Tea available here, tastes great and has very high volatile oil content. This brand is widely recognized as the best on the market for treating IBS with fennel.

A common cause of diarrhea is a build up of gases in the colon. This pressure on the walls of the lower intestine releases absorbed liquids, or prevents it from being absorbed in the first place.

Chewing on fennel seeds after a meal can help reduce excessive gas that leads to diarrhea. Some authorities also suggest drinking a strong fennel tea as a natural treatment for loose stools.

Chronic diarrhea, lasting for several weeks, is a serious condition with many potential causes. Visit a doctor if you experience ongoing watery stools that don’t respond to dietary changes or herbal cures like fennel.

Constipation as an inability to have a regular bowel movement, less than three a week by medical definition, though any less than one a day is generally considered unhealthy.

When you are constipated you feel tired, drained and low on energy, as proper elimination is disrupted and your liver has to deal with accumulating toxins.

Eating fennel seeds can be a natural cure for constipation. The volatile oils in fennel have a calming and anti-inflammatory effect on your entire gastrointestinal tract, improving the passage of digesting food and encouraging elimination. 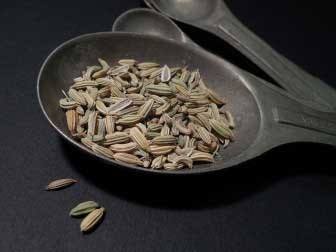 Alongside their calmative and antispasmodic properties, herbal medicine textbooks list fennel as having cathartic, purgative and laxative effects for remedying constipation naturally.

By eating the seeds of the fennel plant, or drinking the tea, you can stimulate the mucus membranes of your digestive tract, increasing intestinal motility and encouraging the peristalsis action which sends you to the toilet.

How to Use Fennel Seeds to Fight Bad Gas

While certain gassy foods increase flatulence volume, most often really smelly gas is a result of the food you eat getting trapped or delayed in the colon, and fermenting or putrefying there.

Chewing on fennel seeds can help prevent this by improving digestive function and gastrointestinal motility. Any trapped gasses are more easily released too, so there’s less chance of noxious compounds building up to breaking point.

With the exception of activated charcoal (which does require more complex timing), fennel seeds, either eaten after your meal or made into a tea, are one of the best homemade stomach gas treatments available.

Fennel tea is quite refreshing and an effective way to prevent belly bloat, abdominal pain and stomach cramps. Its volatile oils help to release intestinal contractions and move along trapped gas.

When you drink the warm tea it travels quickly through your gastrointestinal tract to where it’s needed the most so relief can be even quicker than eating the seeds.

There are also high strength fennel seed tea bags available which are convenient for work or traveling.

After testing quite a few of these, I found Heather’s tummy tea. It’s by far the most effective and the many positive customer reviews here seem to agree.

Fennel as a Natural Remedy

Fennel seeds work for a bloated stomach, bad gas, intestinal pain and other gastrointestinal issues, like IBS and acid reflux.

This potent herb has many other beneficial properties and positive effects as well. You can read about them in detail in this popular article on the many benefits of fennel tea.

Have you had success with using fennel seeds for digestive problems? I’d be interested to hear your experiences with this powerful homemade remedy.

This article may contain affiliate links to products I've researched and recommend. As an Amazon Associate I may earn from qualifying purchases at no cost to the consumer.