Lactose sensitivity is a very common cause of digestive problems, such as bloating, intestinal cramps and excessive gas.

A person who is sensitive to the sugar in milk will often experience gastrointestinal issues soon after consuming dairy products, or one of the many other hidden sources of milk sugar.

Ahead is what causes lactose sensitivity and intolerance, how to know if it’s affecting you, why milk makes you fart, and a list of foods and drinks that contain lactose.

Also learn how to greatly reduce symptoms, like bad gas and belly bloat, if you do have dairy products, using the simple tips and healthy substitutes ahead.

What Is Lactose Sensitivity?

Lactose is a type of sugar found in cow’s milk and other milk products. It is made of a glucose and a galactose molecule.

Lactose should be broken down in your upper intestine by the enzyme lactase. As infants, most of us produce a lot of lactase in our digestive systems and usually have no problems digesting milk. 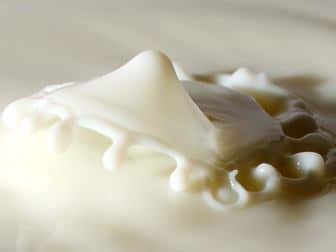 As we get older though, usually around adolescence, the amount of the lactase enzyme that our bodies produce to break down lactose diminishes.

This is quite normal, as milk is for infants and humans are the only mammal that continues to drink it beyond infancy.

Just how sensitive you are to lactose, and how well you tolerate dairy products, depends on just how much lactase enzyme your digestive system is still producing.

Some adults can drink a glass of milk without any obvious side effects. Others may be able to have half a glass without discomfort, but any more than that will trigger symptoms like bloating and gassiness.

For even more lactose sensitive people, even a splash of milk in their coffee can cause gastrointestinal distress.

At this level, a person is considered lactose intolerant. Virtually any milk products or ingestion of milk sugar found in various other foods will quickly cause them problems.

Someone who is very intolerant usually knows it, as they experience belly bloat, cramps, flatulence and even diarrhea soon after having milk and other dairy products.

More commonly, people have varying degrees of lactose sensitivity, making it difficult to pinpoint milk sugar, as the cause of their intestinal issues.

Yet without supplemental lactase like this, they will continue to suffer from digestive issues, such as stomach cramps, bloating and farting from dairy.

How Many People are Lactose Sensitive or Intolerant?

It’s estimated that around one third of Americans would be recognized as lactose intolerant. This figure can be misleading though as it depends greatly on your ethnic background.

Virtually all Native Americans and those of Asian descent have problems digesting the lactose in milk, around 75% of people of African and Caribbean descent have milk intolerance, and around half of Americans with Mediterranean heritage also show signs of intolerance.

Only Americans of northern European descent have commonly developed the genetic mutation to deal with lactose and can drink milk regularly without bloating, abdominal pain and gas. It’s estimated that only between 5% and 15% of these people would be considered truly lactose intolerant.

So while your family background definitely plays a part in just how much dairy you can tolerate, the majority of adults do have a reduced ability to digest lactose.

Unfortunately, despite all the potential digestive problems with lactose, food manufacturers find milk sugar a cheap and useful ingredient and it is added to a wide variety of processed products as you’ll see ahead.

But first, why exactly do dairy products and their lactose cause gas?

Why Does Milk Make You Fart?

When your body isn’t producing enough of the lactase enzyme in your small intestine, any lactose in the food you eat or the beverages you drink pass through to your large intestine undigested.

Certain bacteria in your colon love milk sugar and will quickly go to work fermenting it. This process creates a lot of gassiness and, due to the high levels of protein in milk, it’s usually much smellier flatulence than that produced by the fermentation of the raffinose in beans.

These extra gases in the gastrointestinal system can cause all sorts of problems and discomfort, from tummy bloating and intestinal cramps and spasms, to diarrhea when pressure from flatus gas interferes with water absorption in the colon, and of course lots of farting.

In some respects, passing wind after drinking milk, and getting the gas out before it causes any more problems is the best thing that can happen. Not very comforting I know if it comes on during an office meeting or on a date.

This process usually happens quite quickly and some individuals can experience bloating and flatulence after drinking milk in as little as 15 to 20 minutes. If they are going to have symptoms, most people will usually experience them within an hour of having milk if they are sensitive to milk sugar. 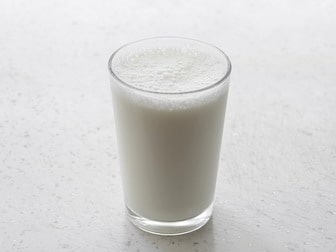 Which makes you wonder why, if lactose is such an obvious cause of bloating and flatulence and it happens so quickly, why are milk products and other sources of lactose still so popular? Why haven’t we worked out on a larger scale that milk makes you fart?

It’s likely many people can get away with a small amount of milk, perhaps the amount they splash on their cereal in the morning (though surely nutritious and lactose-free  macadamia nut milk is a much better choice).

But then, with their lactase enzyme stores depleted, any one of the many other sources of milk sugar we’ll cover next, have the potential to cause digestive problems and gastrointestinal issues.

Since food containing lactose travels through the digestive tract much slower than liquid, it can be many hours before symptoms appear.

Someone who has milk in the morning without obvious problems, but then ends up gassy in the evening from the lactose-rich lunch he ate, may never make the connection between the two.

What Foods and Drinks Contain Lactose?

Here’s a list of foods and drinks that contain lactose. You definitely want to avoid the products on this list if you are intolerant or highly sensitive.

While milk is the most obvious source of lactose, there are many other potential culprits behind excessive gas, bloating and other intestinal problems caused by undigested milk sugar.

The majority of us though, with varying levels of lactose and milk sensitivity, would also do well to reduce our consumption of the following where possible to prevent bloating, abdominal cramps, flatulence and other symptoms caused by not breaking down the sugar in milk. 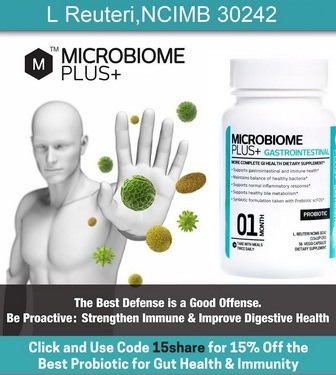 A List of Foods and Drinks High in Lactose

As you can see it’s a fairly extensive list of products with lactose in them.

If there are foods and drinks on there that you simply can’t see yourself living without, then taking this high strength lactase enzyme right before eating or drinking them is a simple solution.

For someone who is truly lactose intolerant it’s important to avoid as many foods as possible on the above list to prevent gastrointestinal problems.

It’s much more serious than just cramps, bloating and flatulence. Constantly dealing with the fermentation of milk sugar can leave your digestive system in a weakened state and lead to harmful bacterial overgrowth and lowered immunity.

For a person who is only slightly lactose sensitive, just avoiding milk itself may be enough to prevent all but occasional problems.

Those with moderate dairy sensitivity (and I’d include myself in this group) would want to avoid milk and generally some of the higher lactose containing foods like soft cheese, ice cream, supermarket yogurt, snacks with milk solids, creamy soups, pizza, doughnuts and milk-based sauces and gravies.

If you’d like to check for sure if you are lactose intolerant or on the higher scale of sensitive then there is a simple test available from your GP called the ‘Lactose Intolerance Breath Test’. 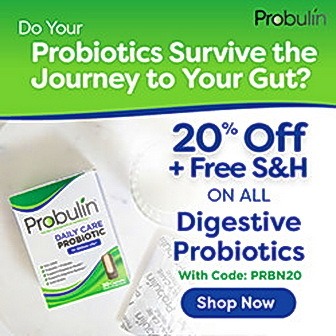 How to Drink Milk Without Farting

If you really can’t bear the thought of a life without flavored milk, ice cream and Camembert on crackers, there are lactase supplements that you can take to replace the milk sugar digestive enzymes your body is no longer making in large enough quantities.

Lactaid is the most well known of these, but these fast acting ones I use contain the same 9000 FCC (Food Chemical Codex) units of lactase per capsule as the highest strength Lactaid. At 180 capsules versus the usual 60 in Lactaid they are also about half the price.

I take them at the same time as an occasional ice cream or pizza and there’s none of the usual bloating, tummy rumbling or gassiness in the hours afterwards.

It’s a good idea to take one of the silver blister packs with you if you think you could be having foods or drinks containing a lot of lactose and have them either just before or with your meal or milk based drink.

Beware of other cheaper brands of lactase enzyme caplets or chewables that only contain 1000 or 2000 FCC units. This won’t be enough for all but the lowest of lactose sensitivity and definitely not enough if you are truly intolerant.

Millions of people in America have problems with the lactose in milk but don’t know it and needlessly suffer with abdominal cramps, bloating, farting and other gastrointestinal issues. Please share this page with your friends and let people know there is a solution.

This article may contain affiliate links to products I've researched and recommend. As an Amazon Associate I may earn from qualifying purchases at no cost to the consumer.