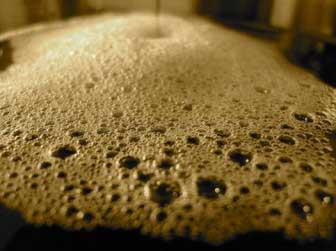 After doing the research for this post I gave up coffee. I’m done with it.

I took the last I had to work as an offering to the caffeine addicts there and replaced it with this caffeine-free yet coffee-tasting substitute. It was actually easier than I’d expected.

Giving up their daily caffeine fix is a scary thought for some people. Many of us are far more addicted to this legal drug than we’d like to admit to ourselves.

What I hope to offer with this post is some positive motivation and momentum to give up coffee.

I’ll do this by covering the damaging effects it can have on your digestive system. As well as symptoms and side effects, including stomach pain, bloating, intestinal cramps, diarrhea and excessive gas.

And for some good news, in following articles I’ll cover caffeine withdrawal remedies, replacing coffee with healthier alternatives and a step by step plan to quit coffee.

Just making this one change in your drinking habits can make a dramatic difference to your health and sense of well being in your daily life.

Okay, if you’ve made it this far without being scared off then let’s get started.

8 Negative Side Effects of Coffee and Caffeine

Coffee contains many acids, oils and chemical compounds like caffeine that can harm your stomach and intestines by irritating their linings.

When you drink coffee your stomach increases gastric secretions of hydrochloric acid (HCl) in reaction to these oils and acids.

This effect is especially pronounced if you drink a cup of coffee on an empty stomach. That makes first thing in the morning the worst time to drink coffee if stomach pain is a problem for you.

Your body has a limited ability to make hydrochloric acid, particularly if you are dehydrated, nutritionally deficient or under stress.

By drinking regular cups of coffee you are kicking stomach acid production into overdrive. Do this for long enough and your body’s capacity to produce hydrochloric acid can be impaired.

When there is a shortage of hydrochloric acid for proper digestion you often have problems breaking down protein in particular.

This is one of the main ways coffee causes gas as undigested, putrefying protein is feed on by the intestinal bacteria that create hydrogen sulfide (rotten egg gas) for those really smelly farts.

Another way coffee makes you gassy and bloated is by stimulating gastric emptying when you drink it with or soon after a meal.

By causing the contents of your stomach to evacuate before gastric processes have done their usual job, digesting food arrives into your small intestine too early. This can cause bloating and intestinal cramps soon after drinking coffee, even diarrhea in extreme cases.

It can also make you fart many hours later, when poorly broken down food arrives in your lower intestine to feed flatulence causing bacteria.

Most people wouldn’t recognize their morning coffee as a prime suspect in why they are so gassy in the afternoon or evening.

Even the way coffee elevates cortisol and adrenaline to give you energy (or is that anxiety) can be responsible for bloating and excessive gas. This is due to the way it diverts your body’s resources away from digestion and into ‘fight or flight’ mode.

All in all, there’s many ways that coffee can cause intestinal cramps, belly bloat and bad gas, since it can potentially interfere with several stages of the digestive process. 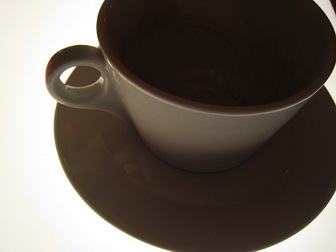 Coffee can cause heartburn (acid reflux) by relaxing the lower esophageal sphincter muscle. This important muscle separates your sensitive esophagus from your stomach with its hydrochloric acid.

It acts as a valve that should stay tightly closed to prevent gastric secretions from backing up into the esophagus and causing acid reflux, often identified as an upset stomach or indigestion.

Caffeine is known to have a relaxant effect on the lower esophageal sphincter muscle. The problem has been shown to occur even with decaffeinated coffee though.

In fact, apart from minimizing cortisol production from the caffeine, decaf does not appear to fare much better from a gut health standpoint than regular coffee.

It has most of the same irritating oils, acids and compounds, the same diuretic, laxative and mineral blocking effects, and has even been shown to be even more acid-forming in the gastrointestinal tract than regular coffee.

Decaf may have a temporary role in giving up coffee for some people looking to let go of their addiction, but it’s not a long-term solution if you value your health.

This non-acidic and caffeine-free Teeccino is the best coffee tasting replacement I’ve found. It brews up like regular java but its organic ingredients do not interfere with digestion or cause flatulence.

If coffee is giving you an upset stomach and making you gassy then try switching to this much healthier alternative.

Some people use coffee deliberately as a laxative and it can indeed stimulate the process of peristalsis that sends you to the bathroom.

In fact, the laxative effect of coffee is so strong it has been observed in studies to happen only 4 minutes after drinking it.

The problem is, hand in hand with this process, coffee also stimulates gastric emptying of your stomach, often before food has a chance to be properly broken down. 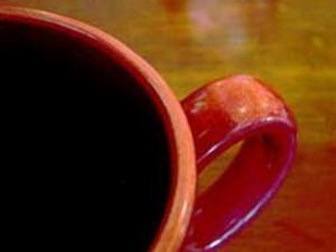 When acidic stomach contents are dumped into the small intestine too early, it can result in injury or inflammation to the very place that is supposed to be absorbing nutrients.

Food that is poorly broken down in the stomach will also remain only partially digested in the small intestine. Once it reaches your lower intestine that equals more problems with bloating and farting.

For sensitive people, coffee can even cause diarrhea if its gastric emptying properties kick in at the wrong time. Drinking milk in your coffee will also exacerbate the risk of diarrhea due to its gas-causing lactose.

Decaffeinated coffee has been shown to have the same laxative and diarrhea effects so researchers don’t think caffeine is solely responsible. Another mark against decaf coffee for digestive problems unfortunately.

Coffee is a well-known irritant for those suffering from IBS, gastritis, Crohn’s disease, colitis and ulcers and most doctors advise it be avoided for sufferers.

In fact, while ulcers are known to originate from the Helicobacter pylori bacteria, coffee’s acidic effect on the stomach can provide suitable conditions for the bacteria to access the stomach lining in the first place.

Coffee is often cited as an intestinal irritant for anyone suffering gastrointestinal problems like stomach cramps, belly bloating and irritable bowel syndrome.

It’s not the caffeine that is as much of a problem as certain enzymes in the coffee beans themselves. This is why switching to decaf for IBS or ulcer sufferers rarely works.

Regular exposure to coffee’s acidity can also prevent the healing of an already damaged GI tract. Once again, regular or decaffeinated makes no difference in this regard so all forms of coffee need to be avoided if you have a stomach ulcer, IBS or ongoing intestinal pain.

Drinking coffee may restrict your kidney’s ability to retain magnesium, calcium, zinc and other important minerals.

Iron absorption in the stomach can also be heavily impaired if coffee is taken at the same time as an iron-rich meal. All of these minerals are required in the complex process of digestion at some point.

Reduction in the already hard to get magnesium is especially problematic as it is needed to prevent constipation and maintain bowel regularity. With constipation a common cause of smelly gas, this is yet another way coffee can make you fart. 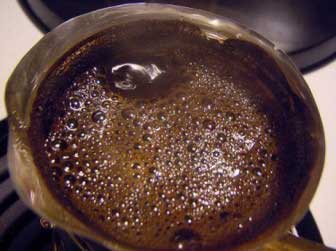 Many people are deficient in essential magnesium but unfortunately it is very poorly absorbed in multivitamins and other supplements.

If you suspect are not getting enough magnesium (or drinking coffee has inhibited its absorption), transdermal magnesium oil sprayed directly onto your skin after a shower can help replenish your body’s magnesium stores.

I have personally noticed a real reduction in muscle tension and an improvement in my energy levels since using it.

Hormones like adrenaline are supposed to trigger when you are in danger and need to respond quickly. They are not meant to be ‘on’ all the time in the way drinking coffee can make them.

Is that jittery rush caffeine gives you really a good form of energy? Wouldn’t a better word for it be anxiety?

This increase in stress hormones can also inhibit the entire process of digestion. This is due to resources away from gastrointestinal processes in preparation for a potential threat.

Coffee and the caffeine in it also play havoc with the metabolism of gamma-aminobutyric acid. GABA is an important compound found in both your brain and your intestines.

In your brain, GABA plays an vital role in regulating mood and stress management. While in your gastrointestinal tract GABA provides a calming effect and keeps things moving.

Unfortunately, caffeine interferes with the way GABA binds to its receptors to provide that calming influence on both the brain and the GI tract. This can both elevate anxiety and damage digestion.

As a final parting shot to your stress levels, coffee can also cause an increase in the excretion of B vitamins, which are central to both relaxation and mood management. 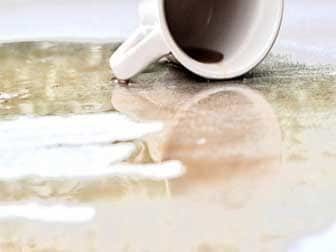 Many people won’t want to hear all of these bad things written about their good friend coffee.

It’s worth asking though, what kind of friend would do this much damage to your digestion and by extension your overall wellness and well-being?

Caffeine addiction is a very common problem in Western societies. Aside from well known issues with heightened stress and sleeping disorders, much fewer people know about digestive problems from coffee.

Can you get away with a cup or two a day without obvious issues? Maybe.

But then again, anyone reading a website on gastrointestinal problems is probably aware that they have an issue or two, even if it’s not that obvious yet.

Wouldn’t it be better to address some of the causes of those digestive symptoms before they become even more obvious and less easy to deal with?

Besides, if you’re not addicted to coffee, then it can’t hurt to replace it with a healthier alternative for a couple of weeks and see whether problems like stomach pain, diarrhea, bloating and farting are reduced.

Better Alternatives and a Replacement Plan

Giving up coffee doesn’t have to be that big a deal if you do it properly.

Substituting it with something refreshing that gives a better type of energy, like peppermint tea or ginger tea, while using these caffeine withdrawal remedies, can help you get through the first few days. It’s usually pretty smooth sailing after that.

The next page has 3 steps to replacing coffee and a bunch of alternatives (this one even tastes like coffee but is alkaline rather than acidic and quite healthy).

Following on from there is a detailed plan for coffee replacement, with specific steps for minimizing withdrawal. Anyone can use it to give up coffee easily and permanently for better digestion and a calmer and healthier life.